Should You Have a TV in the Bedroom?

Should You Have a TV in the Bedroom?

There’s a lot of controversy surrounding the idea of keeping a boob-tube in the boudoir – especially as far as couples go. Experts tout a multitude of conflicting opinions, ranging from the recommendation that televisions in the bedroom lead to better sex, to the admonition that they will cause the slow and steady demise of your partnership.

So which is it? Can the addition of a television in your bedroom really impact the health of your relationship?

It seems like the numbers speak for themselves. In this 2014 study, a significant majority of respondents – 74%, to be exact – said that they kept a TV in their room. The same study also found that the couples who watched their favorite shows together also engaged in twice as much lovemaking as couples who didn’t have a television in the bedroom.

This seems to contradict the homespun advice of some marriage experts, who say that the TV could be a distraction and prevent couples from interacting with one another.

What those experts are ignoring, though, is the prevalence of other screens – tablets, smartphones, and the like – the can lead to further isolation as each partner is absorbed in their own device.

Here are a few points and counterpoints, along with some pointers on how to maintain a healthy relationship while allowing for the occasional indulgence of some late-night entertainment.

There’s no question that if one partner plops down in front of the screen and tunes out to the exclusion of their significant other, it can present a hurdle to healthy communication. That said, if couples agree on their choice of programming and find something they’re both enthusiastic about, it can encourage conversation and foster their sense of mutual interests. The key is to watch together, making it an activity that the two can both enjoy. If you see your partner tuning out, it might be time to change the channel to something everyone can be on board with. 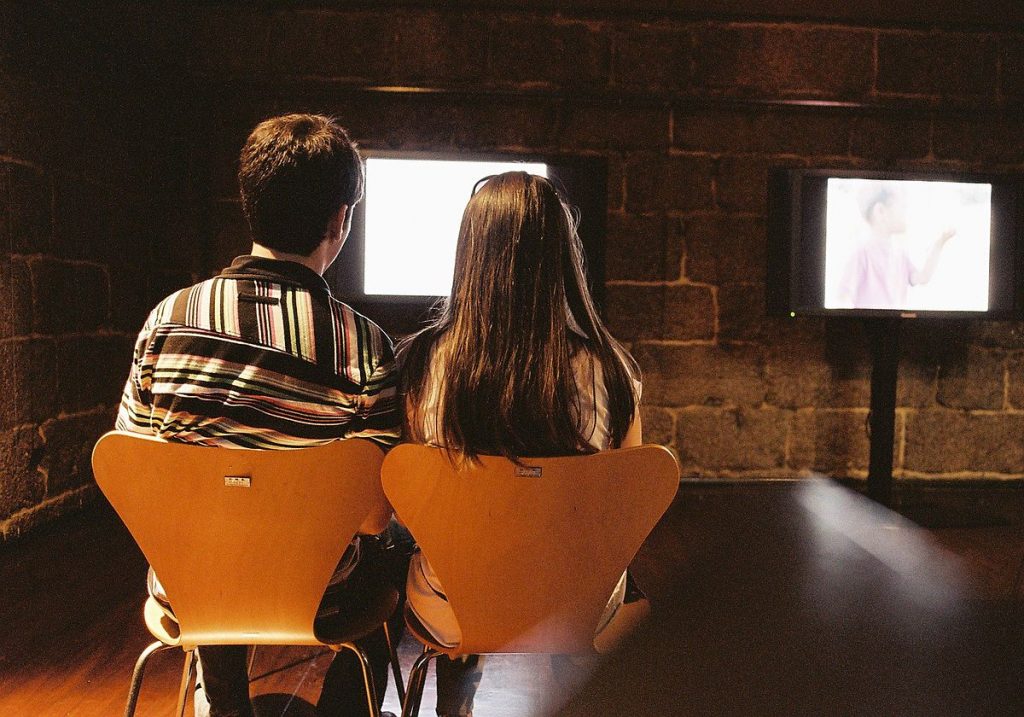 It’s also a good idea to remember that television is just one activity to be enjoyed together – spending every waking hour together in front of the tube can take its toll. If you find that you’re itching to get back in front of that screen, it might be time to pull out the old board games, cook a meal together, or start brushing up on your two-part harmonies. Think about it this way: when was the last time you and your partner made eye contact?

Physical intimacy is vital to the health of any relationship, regardless of the presence of a television in the bedroom. So, what is it about the tube that helps or hinders other bedroom activities? Risque as it may sound, 37% of respondents in the above study said that they watched adult-themed programming to help stimulate things – and, counter-intuitively, 29% said that they got down to business simply because a show was too boring to bear. Sounds like a win-win situation.

While many respondents said that they like to fall asleep to the white noise of the TV, a consensus of experts reports that staring at the screen immediately before bed can alter the quality of your sleep, as the light stimulates the brain and gives it signals to stay awake. It’s a good idea to shut the television about an hour before bedtime to allow the body to relax, while also giving you a chance to decompress, go over your day, and simply snuggle up with your partner.

Like anything else, television can be helpful if used in moderation. A TV overload can cause unhealthy habits and prevent communication, but when used appropriately, it can bring couples together and even enhance their physical relationships.

If you’re considering installing a wall-mounted TV in your bedroom, Puls provides expert and hassle-free installation in ten major cities around the country. Simply order your technician in three simple steps, and your TV will be up and connected in no time flat.

Service includes setup and configuration of all sound and devices, as well as neat dressing of all the wires and cables – your technician can even bring the wall mount bracket themselves! Look to Puls for all your TV mounting needs. Click here for more info.

Now it's time to enjoy a little playtime—outdoors. To help you get the most out of your backyard this summer, you should consider adding some trending outdoor upgrades. Not only will they make your home more attractive and usable, but patios and outdoor renovation projects can also generate a great return on investment when you sell your home.

Spring is nearly here, and as the balmy days of tank tops and shorts beckon, we’re ready to throw open our doors and windows, get some fresh air and sunshine into our homes, and simply let it all hang out. After being cooped up all winter, it’s about time.

All household plumbing problems are not created equal. While some may require professional assistance, there are many repairs you can tackle yourself. With the right tools and a little plumbing knowledge, you can save time and money by doing some common plumbing fixes yourself.